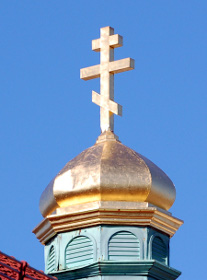 Cross on dome
Two features are typical of the exterior of Byzantine Churches: The gold 'onion' dome is common to both Byzantine Catholic and Orthodox churches throughout Eastern Europe. Its shape, which is like that of a flame, has two symbolic meanings. On the one hand, it recalls the tongues of fire, which descended upon the Church. It is the presence of the same Holy Spirit in our Church that makes our worship and our community acceptable to God. At the same time, the flame could be that of a candle, symbolizing our prayers rising up to God. Our church is first and foremost a community of prayer.

The best-known symbol of our Byzantine Catholic faith is the "three barred cross" which rises from the dome. The cross on which Jesus was crucified was composed of an upright pole and a crossbeam. To it was affixed the title or charge, "Jesus of Nazareth, King of the Jews" ... (INRI in Latin initials). A smaller plank may have served as a footrest. This is the historical reason for the two "extra" bars. Byzantine Catholics also have symbolic attachments to the three barred cross. Tipped upright, the third bar reminds us that Jesus' death opened the gates of Heaven for us; that one thief crucified with Him went to Heaven. A deeper symbolism is that, even in His painful death, Christ remained the True God in glory and the Earth and even the Cross was His footstool as Psalm 95.5 says. It is our custom, upon entering our Church, to make the sign of the Cross once or three times. This we do with the first three fingers of the right hand joined together to symbolize the three persons of the Holy Trinity. The last two fingers, folded into the palm, recall the two natures of Jesus Christ, True God and True Man. Our manner of blessing, from the right shoulder to the left, is the original Christian custom, which was reversed in Italy in the 11 th century. 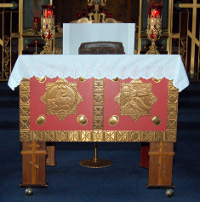 Tetrapod
Next, we approach the Tetrapod, the small table in the center aisle, and bow to kiss the icon enshrined there. We may also light candles as a symbol of our prayer and warm devotion. The Tetrapod is the place where many of the Sacraments are celebrated. The icon is changed according to the feast of the season.

Byzantine church art and architecture are inspired by several key ideas found in the Bible. We believe that Jesus Christ's death and Resurrection have empowered human beings to help undo the damage of the tragic history of sin, which began with Adam and Eve. Our Church buildings attempt to recreate Paradise as Genesis describes it. Here you will find all creation represented: animal, mineral, vegetable and rational.

Our icon screen is done in bronze and attempts to combine traditional Byzantine art with modem elements. The main icons are, on the right: Jesus Christ; on the left, Mary, the Mother of God. On the far right is St. John the Prophet, Forerunner and Baptist; on the far left, St. Nicholas, the patron of Byzantine Catholics. The second row of smaller icons illustrates the 12 great feasts of the church year: the most important events in the life of Jesus and Mary. The central icon over the gates, the Mystical Supper, reminds us that the Eucharistic Liturgy was instituted by Jesus Himself at the Last Supper, when he commanded, "Do this in memory of me" (Luke 22, 19). Above the Mystical Supper, the Blessed Mother and St. John the Apostle stand on either side of the decorated cross. This scene is called the "deisis" or "intercession" and it reminds us that our Eucharistic Liturgy also recreated Christ's self-sacrifice on Calvary.

The icon screen is pierced by four doors. The central doors are called "the royal doors" since the priest enters these only when carrying the Eucharistic gifts, or the Holy Gospel, or when giving a blessing. On these doors are depicted the four Evangelists, through whose Gospels we enter into the knowledge of Jesus Christ. The royal doors are decorated with peacocks, which are an ancient symbol of the Resurrection. 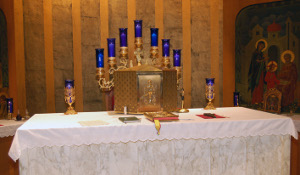 Altar with candelabrum behind
The Holy Table stands to the center of the sanctuary. It represents both God's Heavenly Throne (Isaiah 6) and the tomb in which our Lord's body rested for three days for our salvation. Christ is present in His Church in several ways: in the real presence of the Holy Eucharist; in the inspired words of the Gospels; and through the medium of the holy icons.

The lamp which burns at the left comer of the icon screen is called the "Eternal Lamp". It reminds us that God is always present here. Behind the altar are the seven branch candelabrum, (Revelation 1, 12), and the Bishop's Throne.

The Stained glass windows date from the renovations of 1948-1950. They represent the major feasts of the Church year. In the choir loft, the windows depict two great Fathers of the Eastern Churches: St. John Chrysostom and St. Basil the Great (both 4th century). The Liturgies which we celebrate were composed by these two saints.

The art of mosaics was perfected by Byzantine artists in the 6th century and our Church contains several examples of mosaics. On either side of the icon screen are modem style mosaics of St. Cyril and Methodius, the missionary brothers who brought the Byzantine Catholic faith to the Slav peoples around 863. The alphabet still used for our Church books and for modem Slav languages was invented by St. Cyril. On the north side is a mosaic icon of the Protection (Pokrov) of the Mother of God, who cloaks the Church in her mantle. On the south side is the Transfiguration, picturing Christ between Moses and Elijah. These mosaics were executed in Italy. Another mosaic icon adorns our Baptistery. Much of our carpentry, woodwork, lighting and design have been gifts of the talented parishioners. 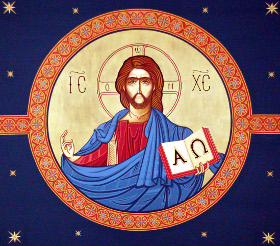 Icon of Christ, Pantocrator
The World rediscovers its original created goodness only when it acknowledges God as Lord. Therefore, the icon of Christ, Pantocrator (He who holds the whole World in His hands) looks down from the ceiling. In the Church, Jesus Christ is Lord to the glory of God the Father. The icon of Christ, Pantocrator, also reminds us that, when the Church worships, it participates in a foretaste of the life of Heaven, described in Isaiah 6 and Revelation 21. This fact is expressed by the heavenly blue, star-dappled ceiling. Sharing the worship of the angels and saints, we are, in the words of the Epistle to the Hebrew 12:1, "surrounded by so great a crowd of witnesses". In many Byzantine Churches, the walls are entirely covered with icons of saints. Our own Church is surrounded by the witness of the 12 apostles, whose framed icons hanging between the windows come from our original church on 19th and Passyunk and date back to 1894.

The Church is called the "Body of Christ" and it is the mission of every Church community to help make Christ present in the World. The icon of the Mother of God "Platytera" (she who is more spacious then the heavens) expresses how the Church, by echoing Mary's "yes" to God's Will, gave God a place in time and space to save us. Like Mary, the Church must reach out to embrace all peoples, but always with Christ at the heart and center. Jesus told His Disciples, "I am the Vine; you are the branches. Whoever remains in me and I in Him will bear much fruit, because apart from me you can do nothing" (John 15,5).

The Wall surrounding our altar has been decorated with a subtle vine pattern, taken from a Muscovite palace of the 17th century, to express how our life in Christ is rooted in the Sacraments celebrated at the Altar.

St. Josaphat Icon
Icons play a major role in our practice of the Christian faith. The icon is a means of communication, which allows us to focus our concentration. By contemplating an icon, we use our senses to achieve a powerful, meditative mood. Through the holy pictures, we direct our prayers to God, who became visible and approachable in His Son, Jesus Christ (John 1: 18).

The most striking feature of a Byzantine church is the Icon Screen or Iconostas. Its origins come from the Bible, for it recalls the veil of the Temple in Jerusalem, which separated the "holy of Holies" from the rest of the structure (Hebrews, 9:31). The Iconostas is not a barrier but rather a means of focusing attention on the altar. We believe that our earthly worship participates in the worship of God, which goes on eternally in Heaven. By praying along with the images of the citizens of Heaven, we remind ourselves that our goal is to take our places one day at his Heavenly Liturgy.

A particularly important icon is enshrined opposite the baptistery. The frame image of St. Josaphat, Byzantine Catholic Bishop martyred for the faith in the 17th century, is some 150 years old. It was given by the Byzantine Catholic parish of the Holy Trinity in Istanbul (Byzantium) Turkey to Holy Ghost Parish on the occasion of our centennial in 1991.


The present Church building dates from 1923 and replaces a smaller Church built at 19th and Passyunk in 1894. A Byzantine community gathered in this neighborhood as early as 1886 in a private home for the celebration of Liturgy by traveling priests. The parish itself was organized in 1891. The present building was renovated in 1948 and underwent extensive redecoration for the Centennial of Holy Ghost Parish in May of 1991.